Our trip to the the total eclipse.

This is a once in a lifetime bucket list trip.  We headed north on Saturday headed for the total eclipse in Oregon. I-5 was heavy with traffic all the way to Weed where we turned off and headed for Lake Shastina, our camp for the night. We did run into smoke from the forest fires around Corning CA, it was to be our companion for a long time.   Lake Shastina was a free camp site I found on freecampsites.net a great site that lists NFS and other campsites a little or no cost to camp. Expected the campground to be full but were surprised that many sites were open. 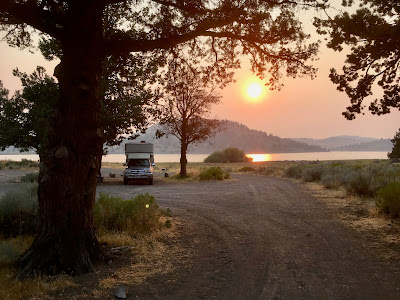 Our camp for the night, smoke so thick in the sky you could look at the sun. 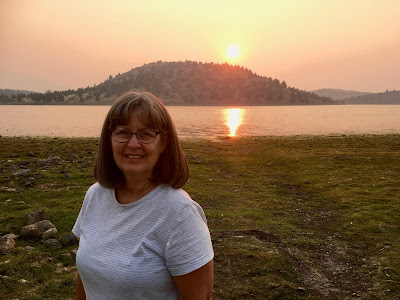 Sunset was red, the pictures do not do the color justice.

A couple of happy campers. 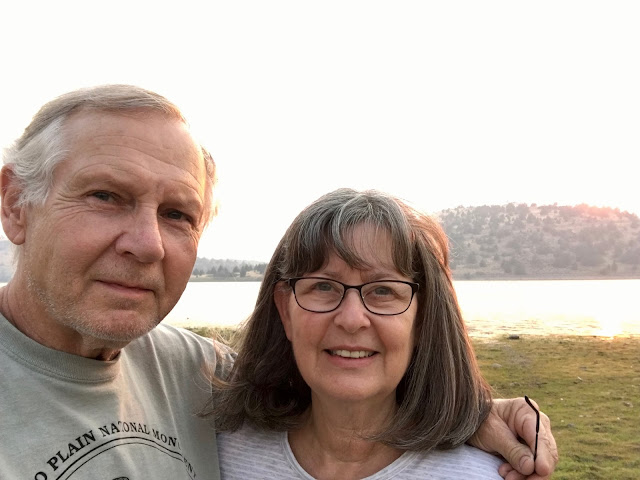 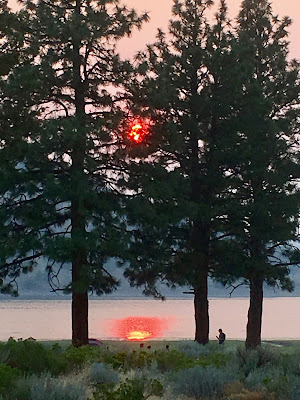 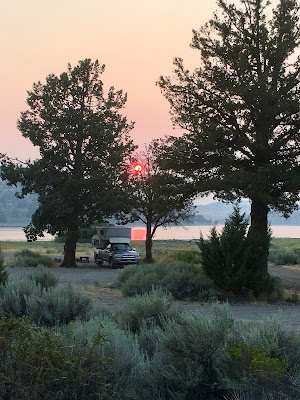 We did a walk around the campground and had a steak on the grill for dinner. Most campers were in tents, they are still true campers. There were only a couple of big RV's who spent the night.


Sunday our plan was to head north back on I-5 to Central Point OR and the Rogue Cheese Factory. I-5 was packed with traffic as it had been the day before. We stopped and looked at Ashland OR; had coffee at the Growler Brothers coffee and beer shop. Had to send a picture of the beer taps to my son in law Ryan.

We had reserved two nights at Crater Lake NP a full year ago. Our plan was to get up early and drive to the area of the eclipse. After seeing the amount of traffic and listening to the radio we changed our plans. We would look for a place to stay tonight were we could see the eclipse without moving the truck. Found three possibilities on web and decided to head for Sisters Bolder just out of Sisters OR. First we needed to try the Rogue River Blue cheese. If you are in the area the Rogue River Cheese factory is a great stop. 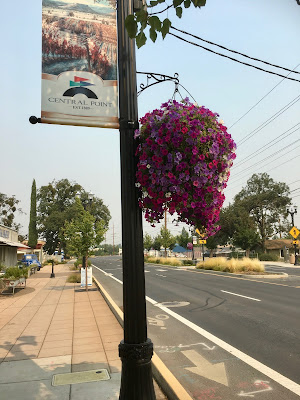 Lots of samples of their cheese and they were sampling Balsamic vinegar served over the blue cheese and a pear slice on a crisp cracker. Yes we had to buy a bottle. They also had grilled cheese sandwiches and a made in house rootbeer.  We left full and with cheese for the fridge.


Next we were off to  Crater Lake to check in so we did not lose our campsite and then off to Sisters Bolder.  Highway 62 out of Medford to Crater Lake was a nice road with very little traffic. We are still in the smoke and can see fires in the distance. We checked in to Crater Lake and found a campsite. Large signs that they have a water shortage, showers were limited on time and may be cold. Not sure how heating water and the shortage ties together.  We took the north rim drive around the lake back to Hwy 97. There were several miles of gravel road and construction. Traffic picked up when we got to Hwy 97, our plan to drive up today was looking good.  We found Sisters Bolder and it was not as described.  We did pop up the camper and looked around. In the trees with limited view of the sky, not good for viewing the eclipse. Also the area did not have a good feel to it. Joint decision was made to try our second choice Skull Hollow campground north east of Redmond OR.  Almost sure the campground would be full but thought we could find somewhere near to camp. The campground was full but we drove around and checked it out. The camp host stopped us and said all was full,  he told us down the road we could find camping. Nice guy who was over run with campers.

Just up the dirt road we saw two other pop up campers and asked if we could join their camp. Nice people and we set up camp. 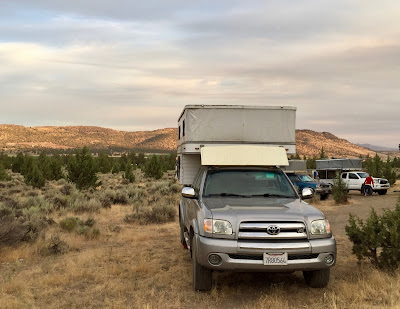 Great spot with a clear view of the sky. Just a few clouds that were forecast to clear tomorrow. 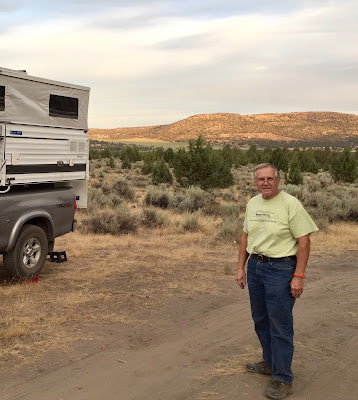 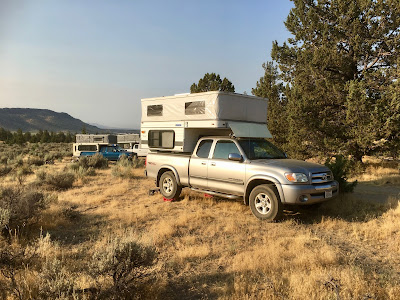 Quiet night with just a few campers coming into camp late. Woke up to clear skies and no smoke. This was the day we were waiting for. 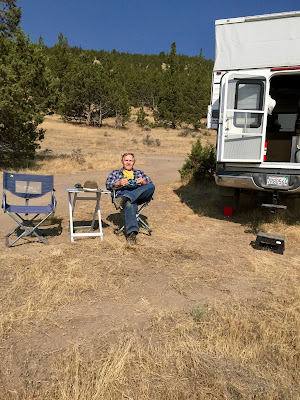 Chairs and table set up for the big event.

Our view over the valley, clear and no smoke.

The eclipse starts slow as we watch through our glasses. At around 80% you can feel it start to cool off. At 99% it is still light and you can not look at the sun without glasses. At 100% it gets cold, cannot see anything through the glasses. WOW look at the sun and see the corona in a dark sky, stars are out and there is a 360 degree sunrise.  We had about 1min and 30 seconds of totality. The experience far exceeded my expectations. 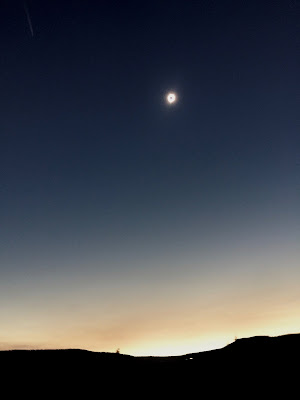 Did not take a lot of pictures, the pros can get better shots than us with our Iphones.  We just took it all in, an experience I will not soon forget. 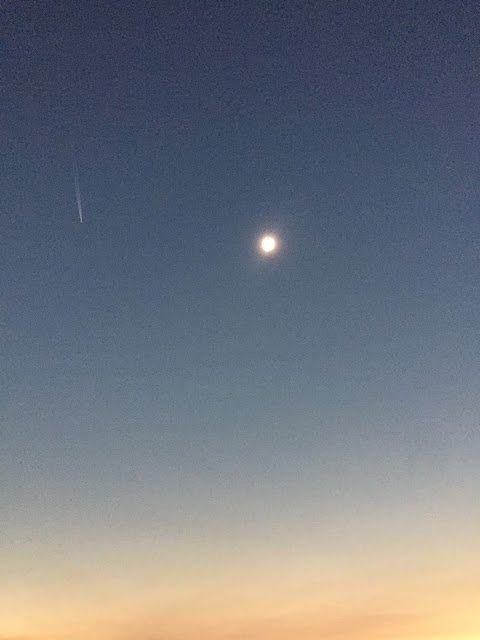 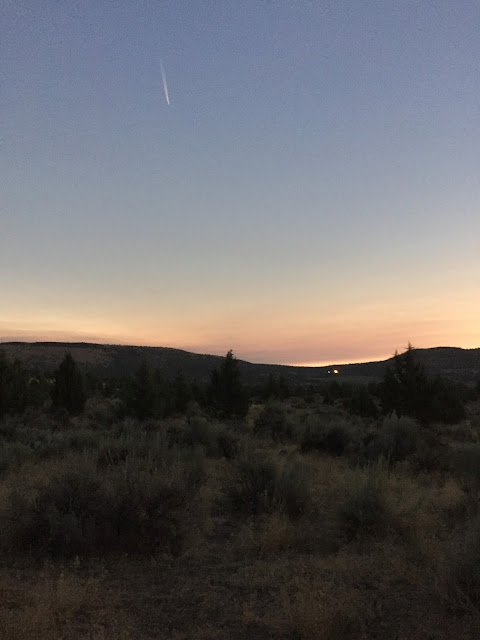 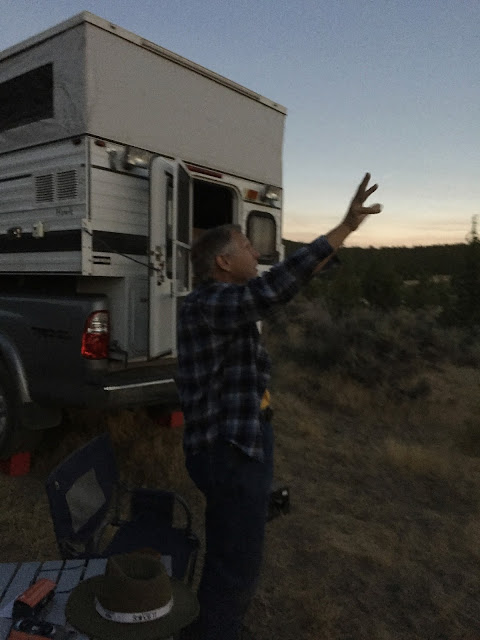 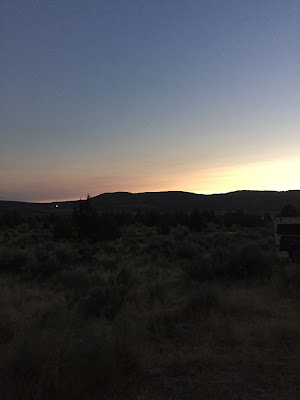 Note it was much darker than the pictures with our Iphones made it look. 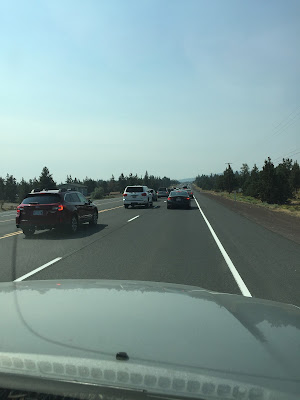 After the sun started to return many people started to leave and try and beat the traffic. We closed up the camper and joined the fun. There were cars parked everywhere along side the small roads out of Redmond.  We got on 97 for a long trip to Crater lake.  May have taken 2 hours long extra to make the drive to Crater Lake. Several small towns had one stop light.  Traffic was backed up for miles for the light,  took 30 minutes or more to get through each of the small towns.

We left the traffic behind when we turned off Hwy 97 to Crater Lake. As we drove up the mountain we also drove back into the smoke. 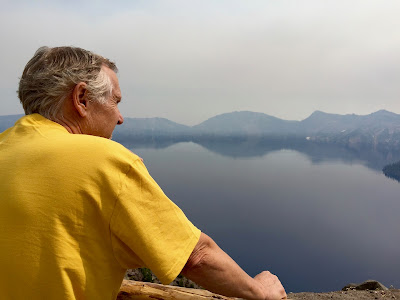 Smoke was filling the basin around Crater Lake. 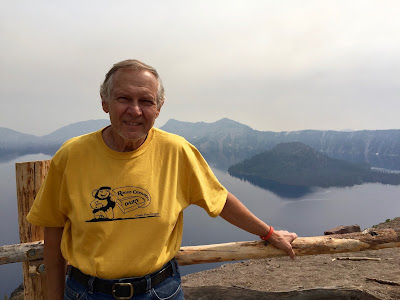 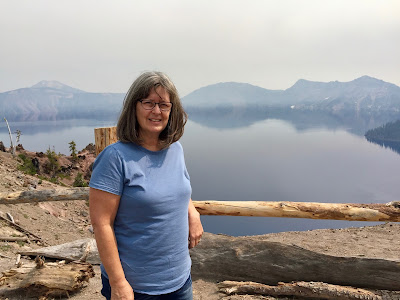 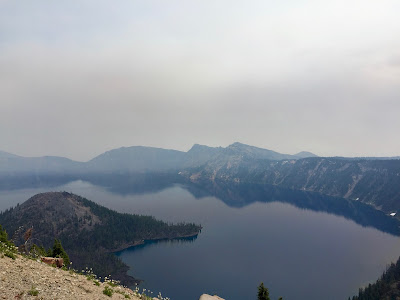 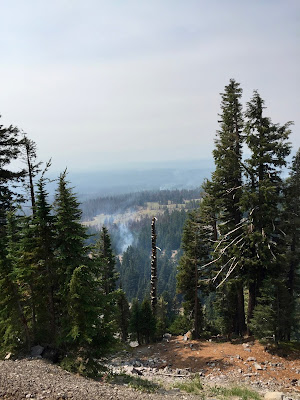 Would have been a beautiful view without the smoke.

You could see the fires as we drove in on the north rim.   Really sad to see the forest on fire. 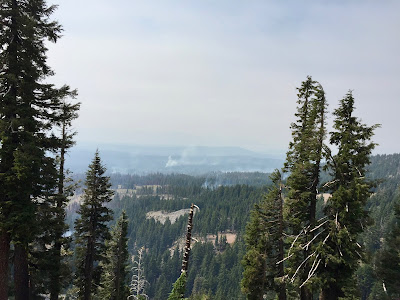 More fires in the distance, this area needs rain.


We had made reservations at the Crater Lake Lodge for dinner.  We always try to have dinner at the great lodges of our National Parks. It as been 25 years since we have dined at Crater Lake.  There was a nature talk before our dinner and we enjoyed learning some history about Crater Lake. The park rangers do a great job.  We have dined at Yosemite, Grand Canyon, Bryce Canyon, Zion Canyon and Glacier National Parks. 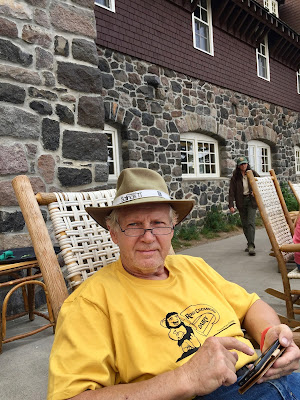 Enjoying the view in a rocking chair on the deck of the Crater Lake Lodge. 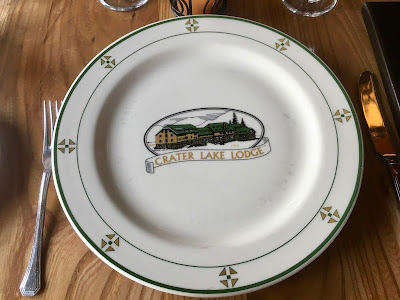 These plates could be older than I am. You do get great service at the lodges. 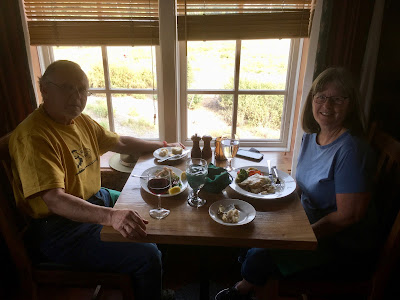 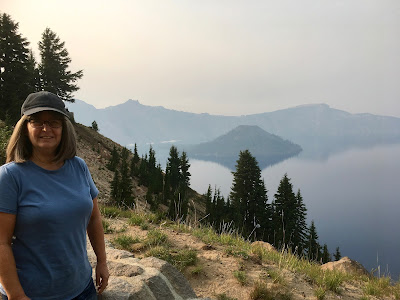 Our walk along the rim trail after dinner.   Will have to come back when the smoke is gone. 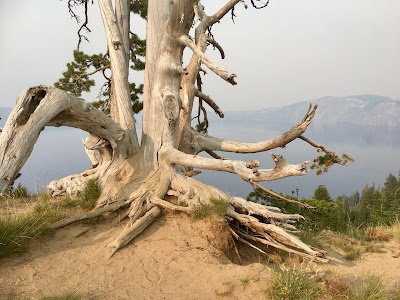 This tree is still living and hanging on. Summer is short at Crater lake. We have tried to go in June and the park was closed because of snow.

Our final picture of Crater Lake before heading for the campground and our last night on the road.

Tuesday we got up and headed for home.  Hwy 97 was still heavy with traffic, slowing at every traffic light. Picked up I-5 at Weed, traffic was like driving into the San Francisco bay area.  Moving fast and heavy.  I was glad it was moving and not stop and go.  If the schedule works we might try to see the next eclipse April 8, 2024. Might see the eclipse twice in  a lifetime. 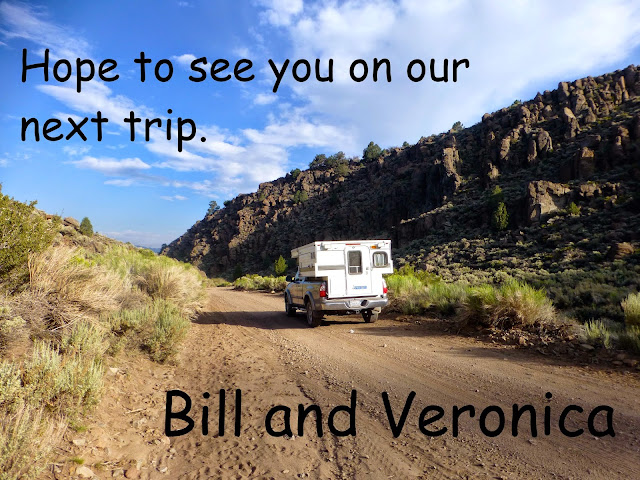