Got out of town at 11:30 AM and headed to the FWC Rally at Sugarloaf SP. Driving up I-5 saw sign that Hwy 12 was closed due to an accident. Had to make a detour to Walnut Creek and Isleton to get to Rio Vista and back on 12. Most traffic I have seen on Hwy 160. 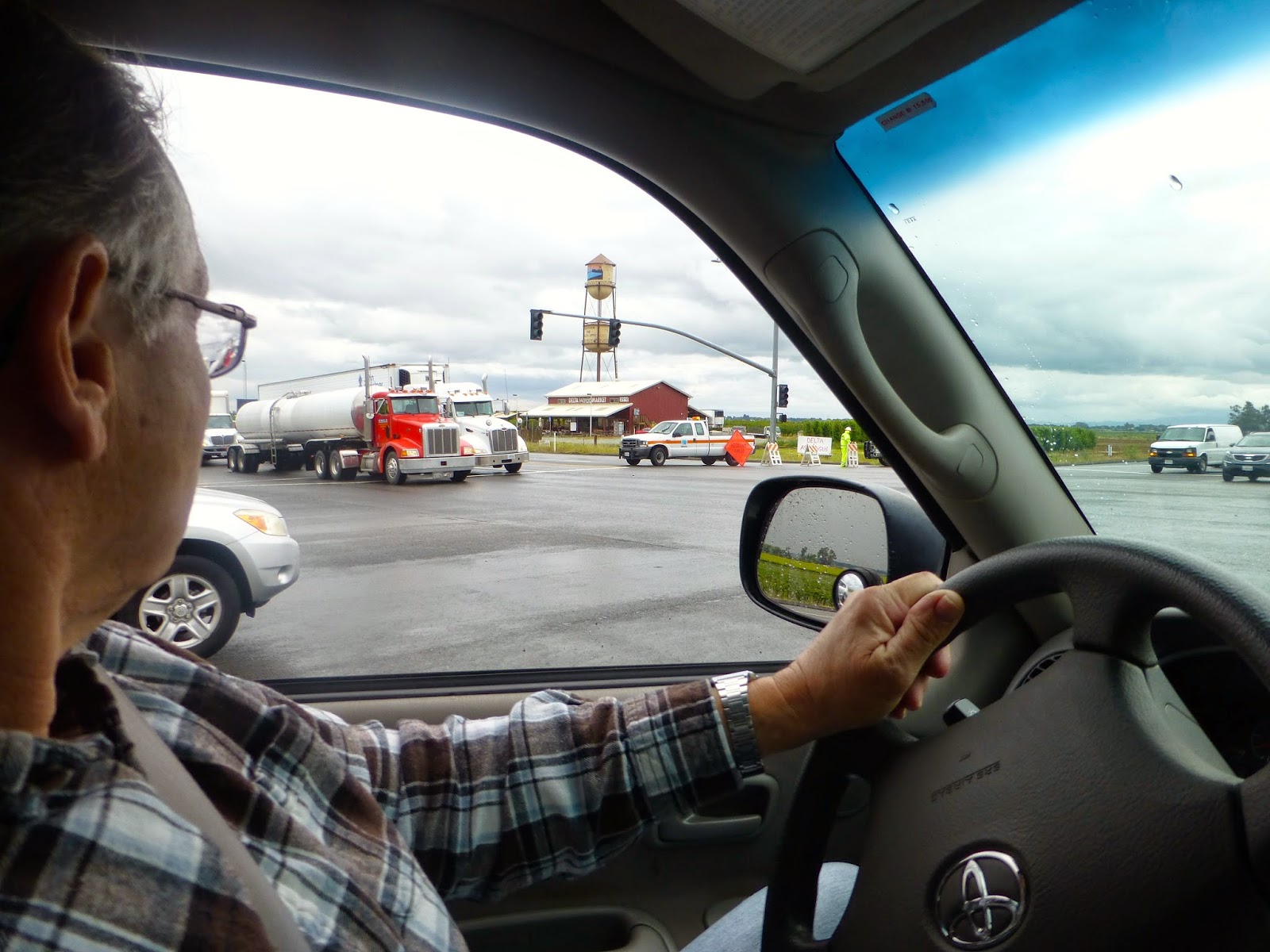 In and out of the rain all the way to the Sonoma Valley. We stopped at the Sonoma Market to do some shopping. I recommend anyone driving by stop, one of the best deli's around.  For lunch on the way up we had looked online and the Cafe Citti in Kenwood looked like somewhere we would like to try. We were impressed with lunch, Smoked Chicken Caesar Salad for Veronica and Calamari Sandwich for me. Both were great.

Short 4 mile drive up the hill to Sugarloaf State Park, our first time there. 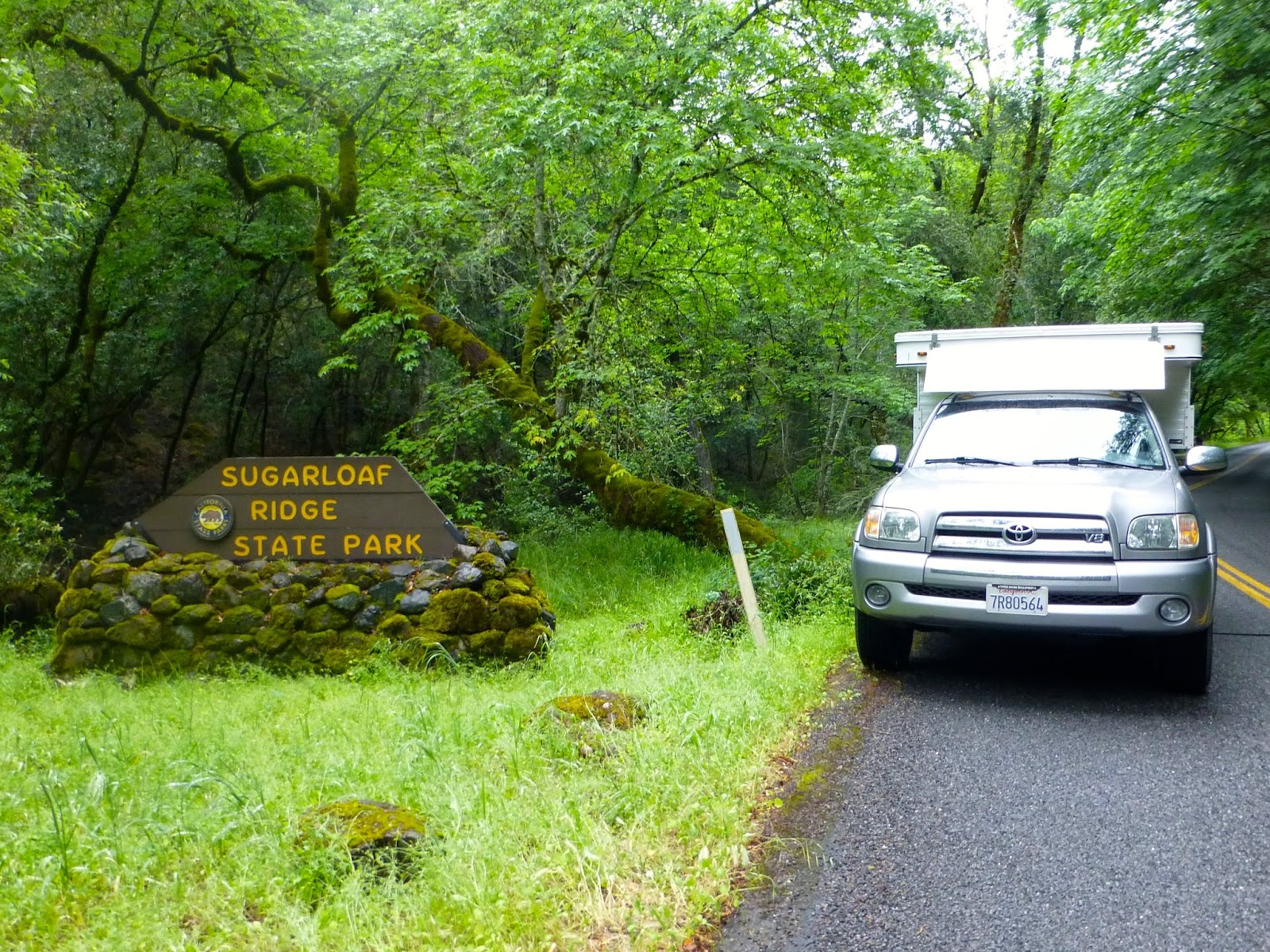 Light rain falling as we checked in and found a campsite. 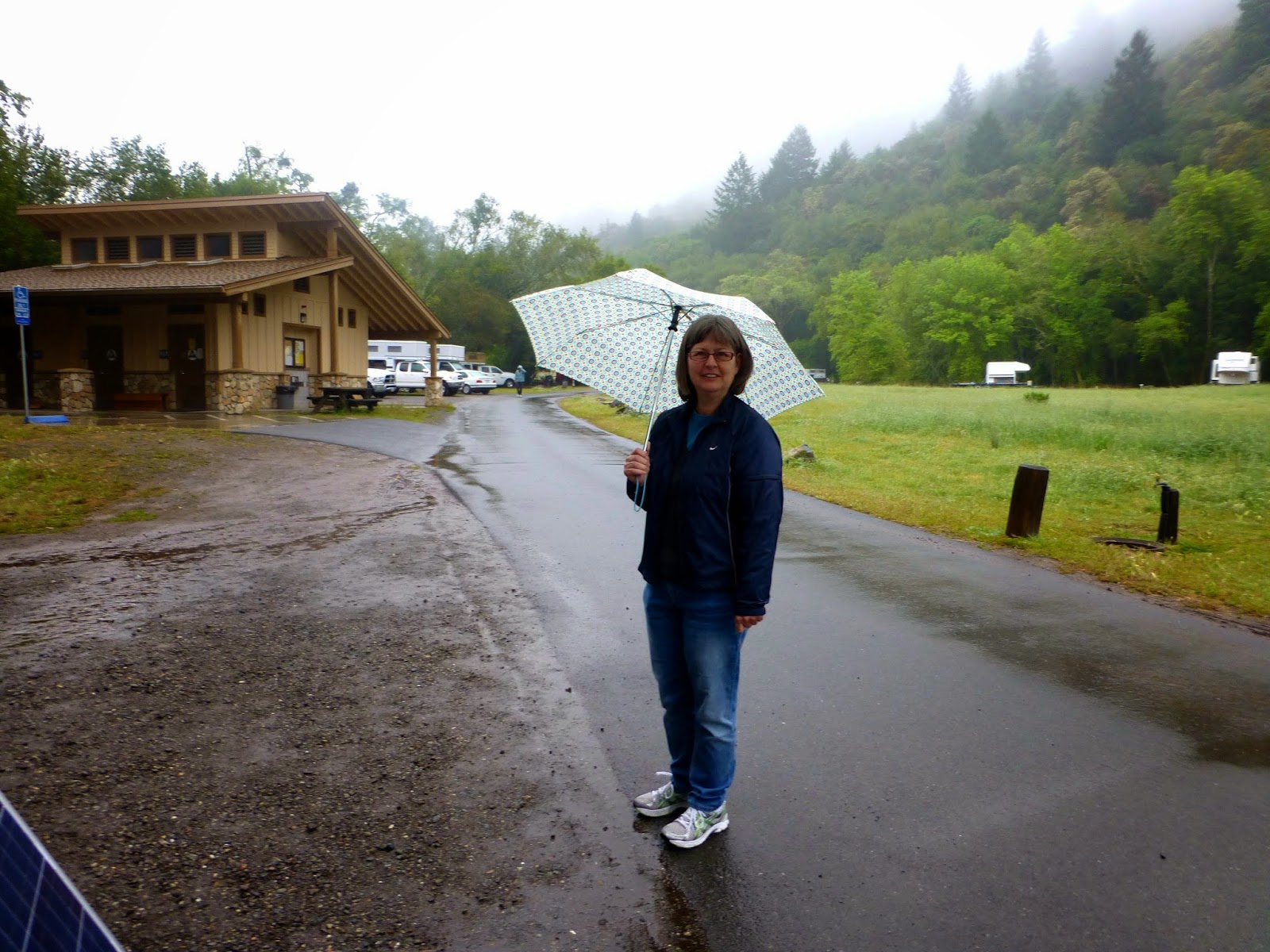 Being from the hot valley we found a place under the trees for shade. This was be a error as we would find later. Four Wheel Camper had a happy hour for the Friday arrivers. We met some nice people there. Not too many from the southern CA rally we attended last fall. Rain was picking up so we headed back to our camper for dinner and to get warmed up.  I continue to be impressed with how well everything is working in the new camper. Read books for a couple of hours and got ready for bed. The automatic thermostat drops to 45 degrees at night and back to 68 in the morning. The heater came on 4 times at night as the temperature dropped to 37 degrees that night. We were awake each time it came on, due to the error we had make earlier picking this campsite. The rain collected as it fell though  the trees. The sound was some what like tennis balls hitting the roof. Not a good nights sleep on Friday night.

Cold damp morning, but blue sky breaking through. We are early risers so we had coffee and yogurt in the warm camper. FWC was having rolls and fruit at 8:00 AM. We walked down and visited, it was nice to not have rain falling.

I set up my Solar in a Bag at 9:00 AM and had a full charge on both camper batteries by 2:00 PM. The DC fridge is working just like the fridge at home, great. The solar is easily keeping the batteries charged, very happy with this set up.

At 10:00 AM the tour of the campers started. Everyone has made changes to their campers so they are how they want them. I do not think there were two campers the same. FWC brought the new flatbed UTE camper. Lots on interest in it, lots of room inside and a queen size bed without a pull out. I can see me making a rear awning for our Hawk. Would have been nice in the rain.

This is one of the things from the tour I have never seen before. Campfire in a can, ran on propane 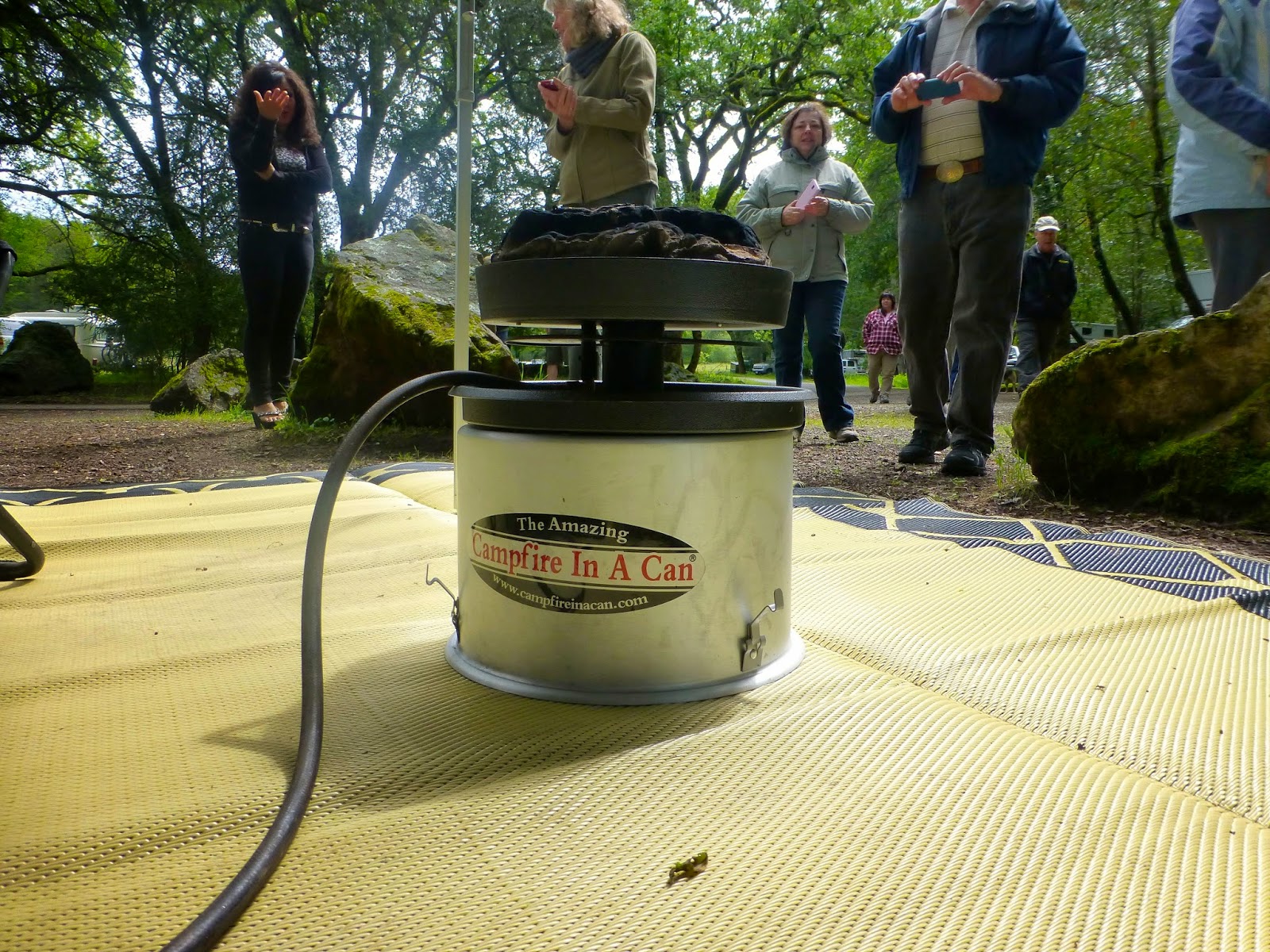 This was our campground neighbor's rig.  New Tundra with Aluminess bumpers front and read. Hawk looked great with this set up. 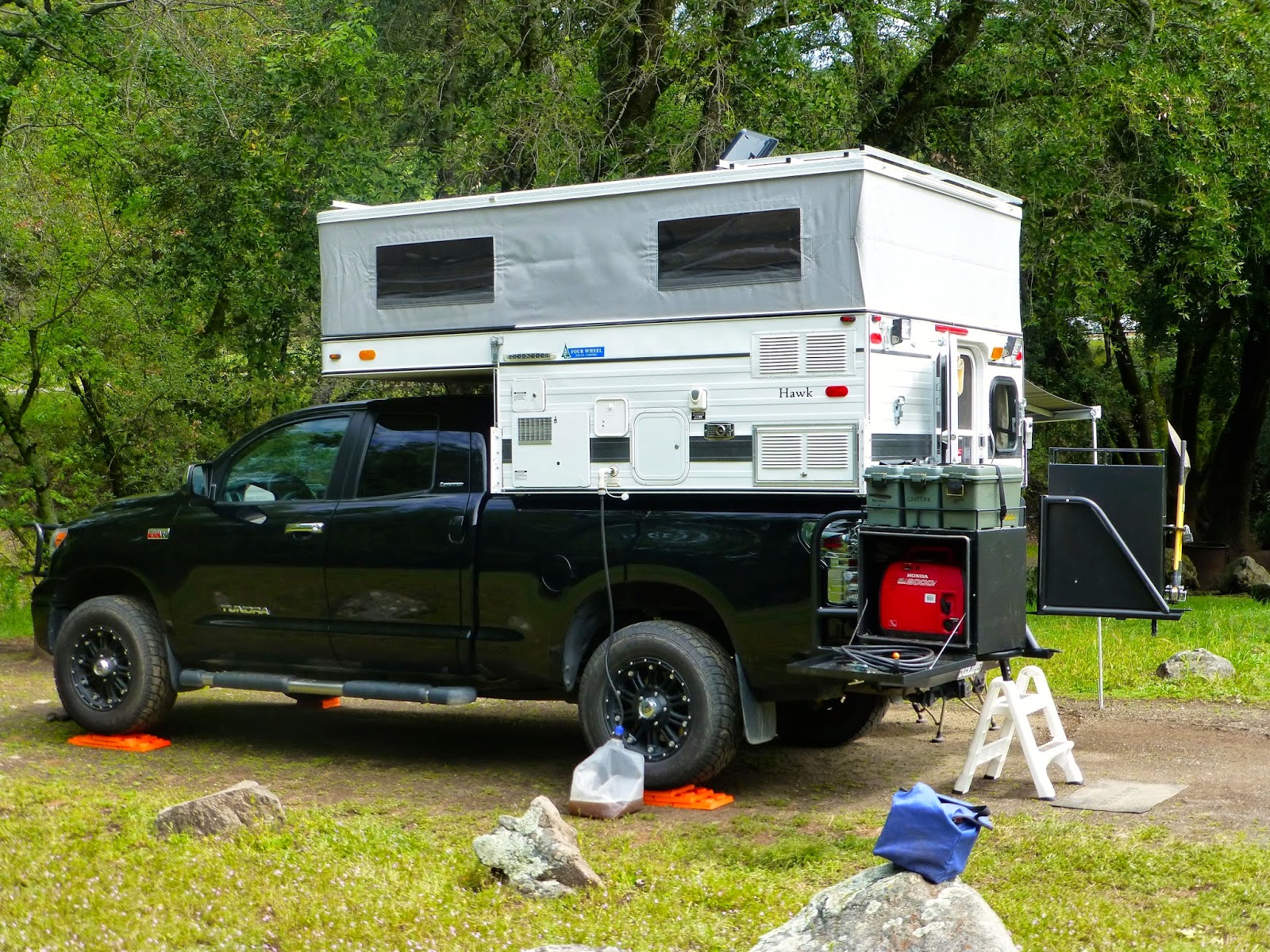 After lunch we headed for the Q&A session at the amphitheater.  How often do you get an update from the company owner and open questions. Tom covered lots of items and answered everyones questions. 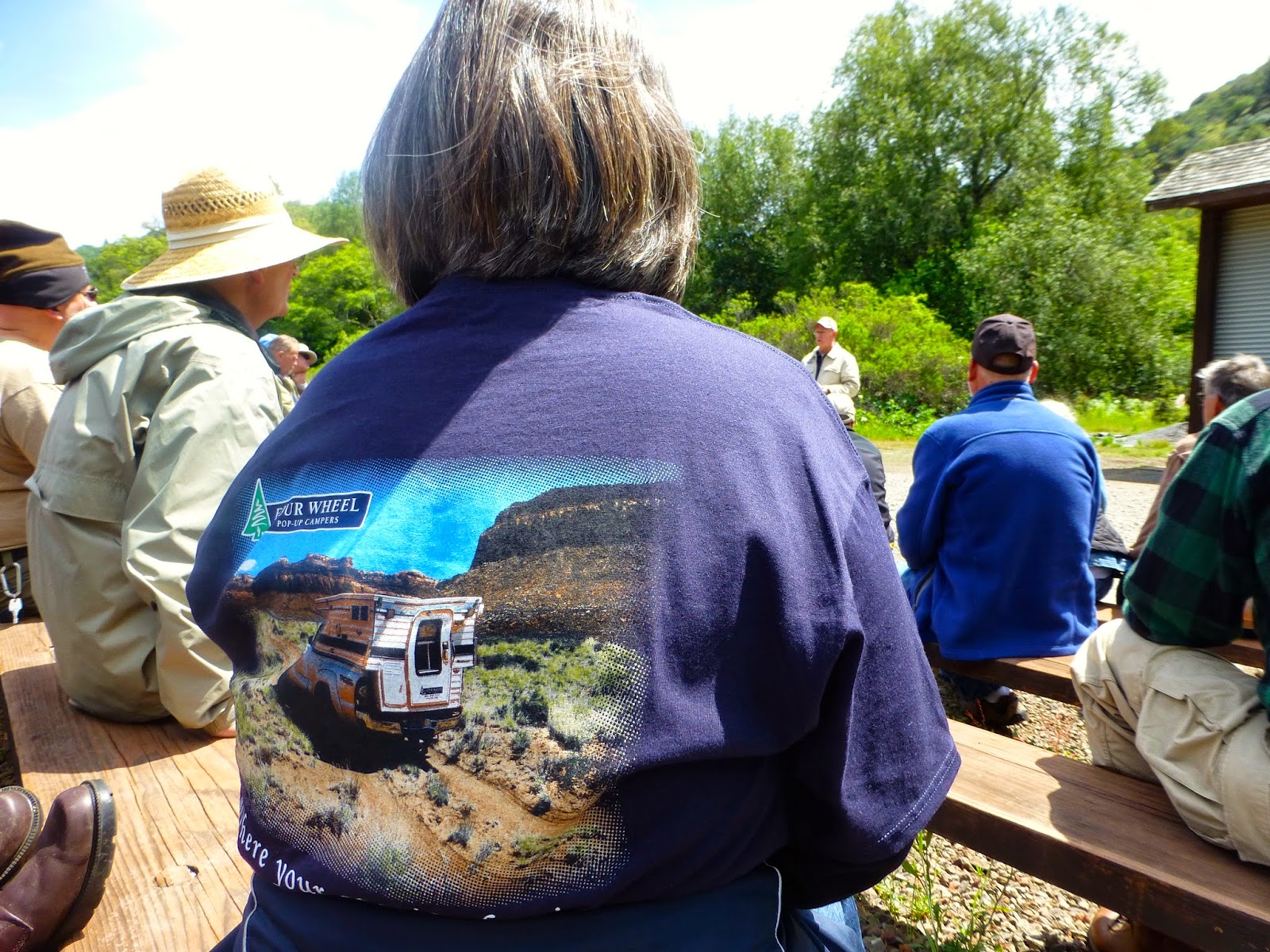 Nice to sit out in the warm sunshine. Veronica decided that we should move the camper out from under the trees for Saturday night. I have such a smart wife it made a big difference when it started raining at 4:00 AM Sunday morning. 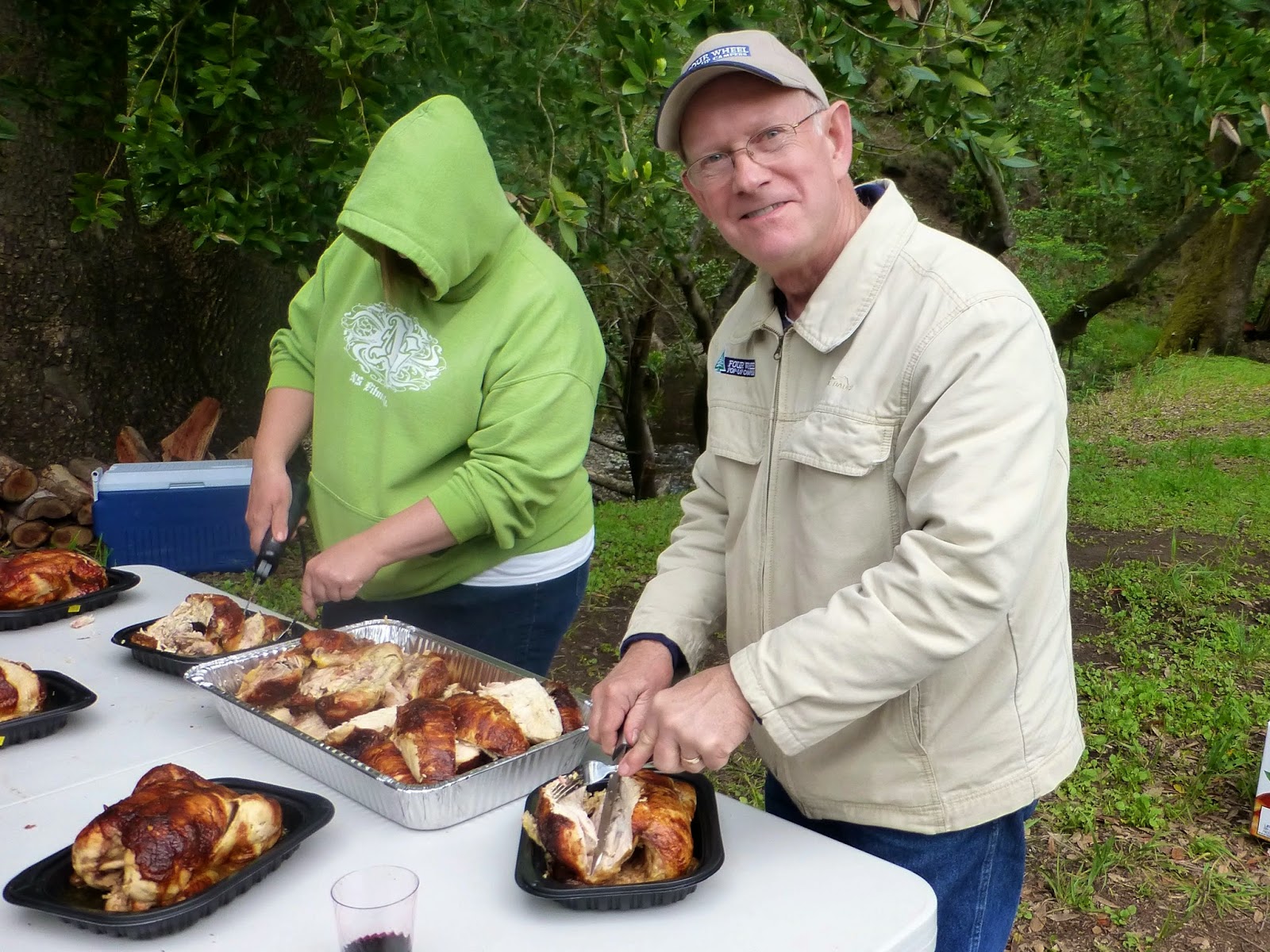 Dinner was a potluck with FWC supplying chicken, hamburgers and hot dogs.

These were some of the best Artichokes I have had. 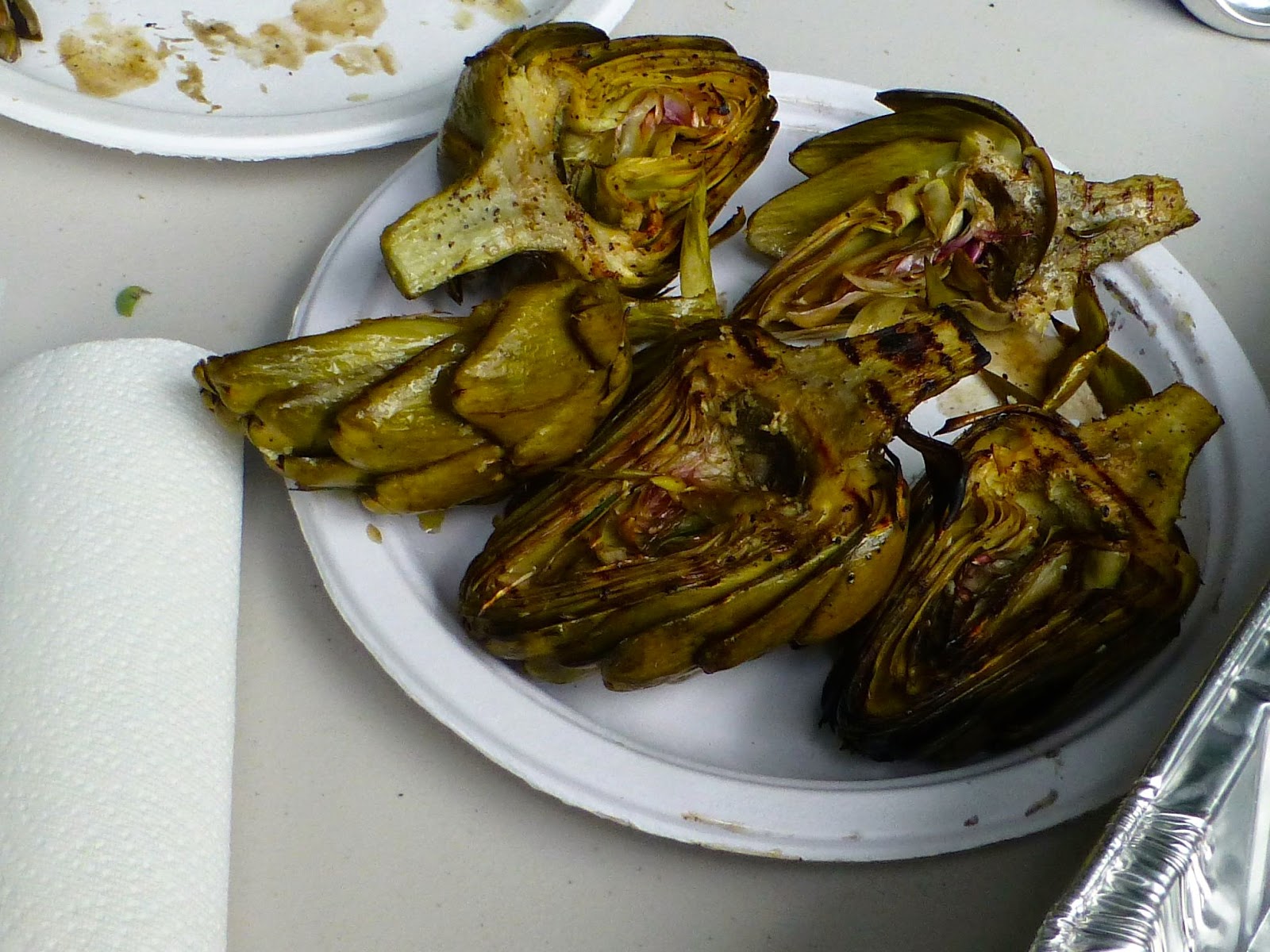 This table was full when dinner started. 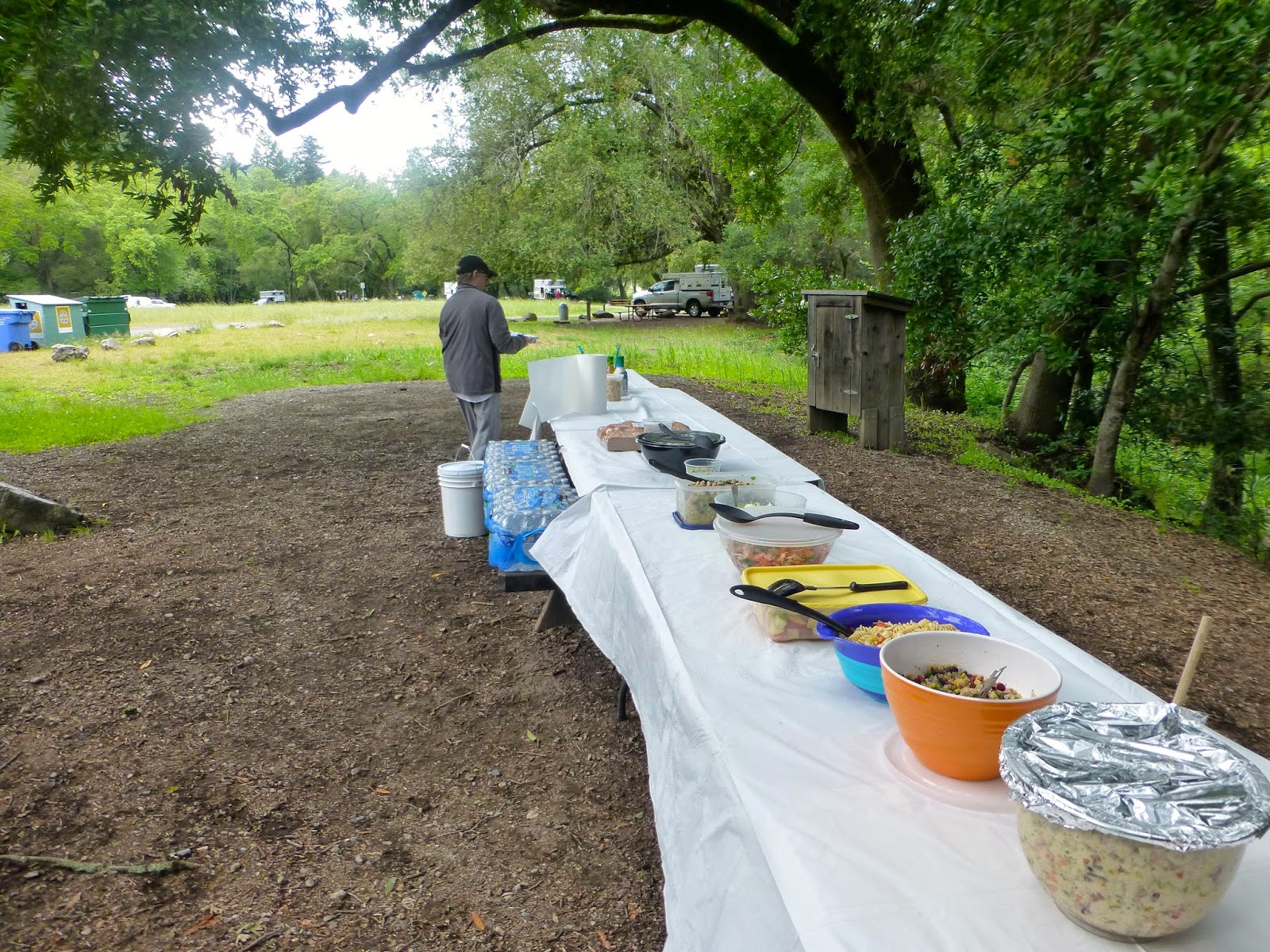 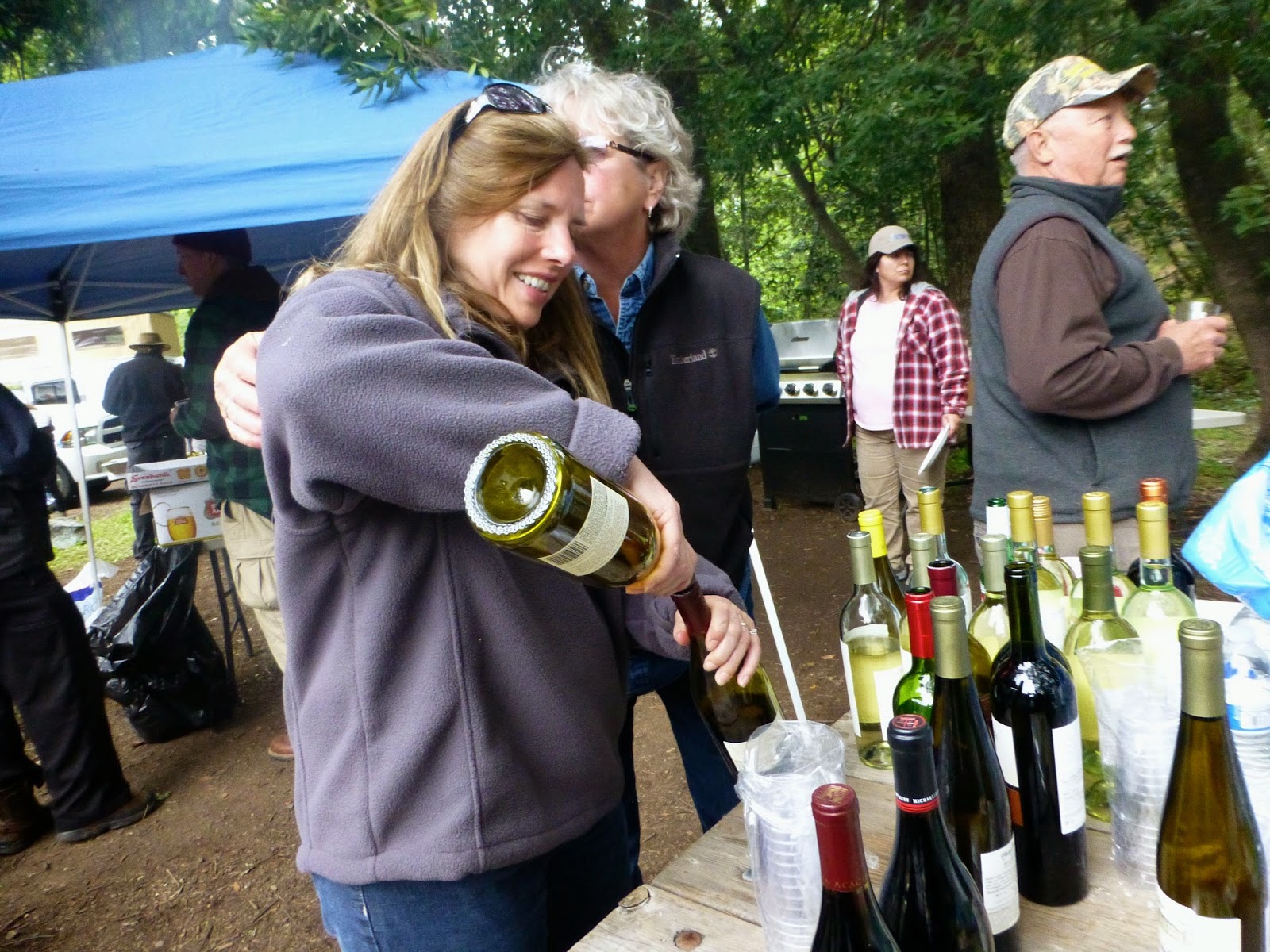 Lots of good conversation after dinner. The two Hawk owners from Petaluma,  who we met at Pinnacles NP showed up for dinner. It was nice seeing them again, hope to run into them camping sometime.  There was a star show at Robert Ferguson Observatory just a short walk away. However the clouds were coming in and Veronica and I decided not to make the walk up the hill.

Morning came early as the rain started about 4:00 AM. The noise was much better as we were not under the trees. We both fell back asleep until the heater came on to warn up the camper. 47 degrees this morning so the heater did not come on all night.  Light rain falling so we had breakfast in our warm and dry camper. FWC was having a full breakfast at 8:00 AM but were a little late getting going with the rain. They did put on a great spread with breakfast burritos and fruit, eggs and meats. More than we could eat.

The lady below drove her own camper to the rally. She must have cracked 100 eggs. 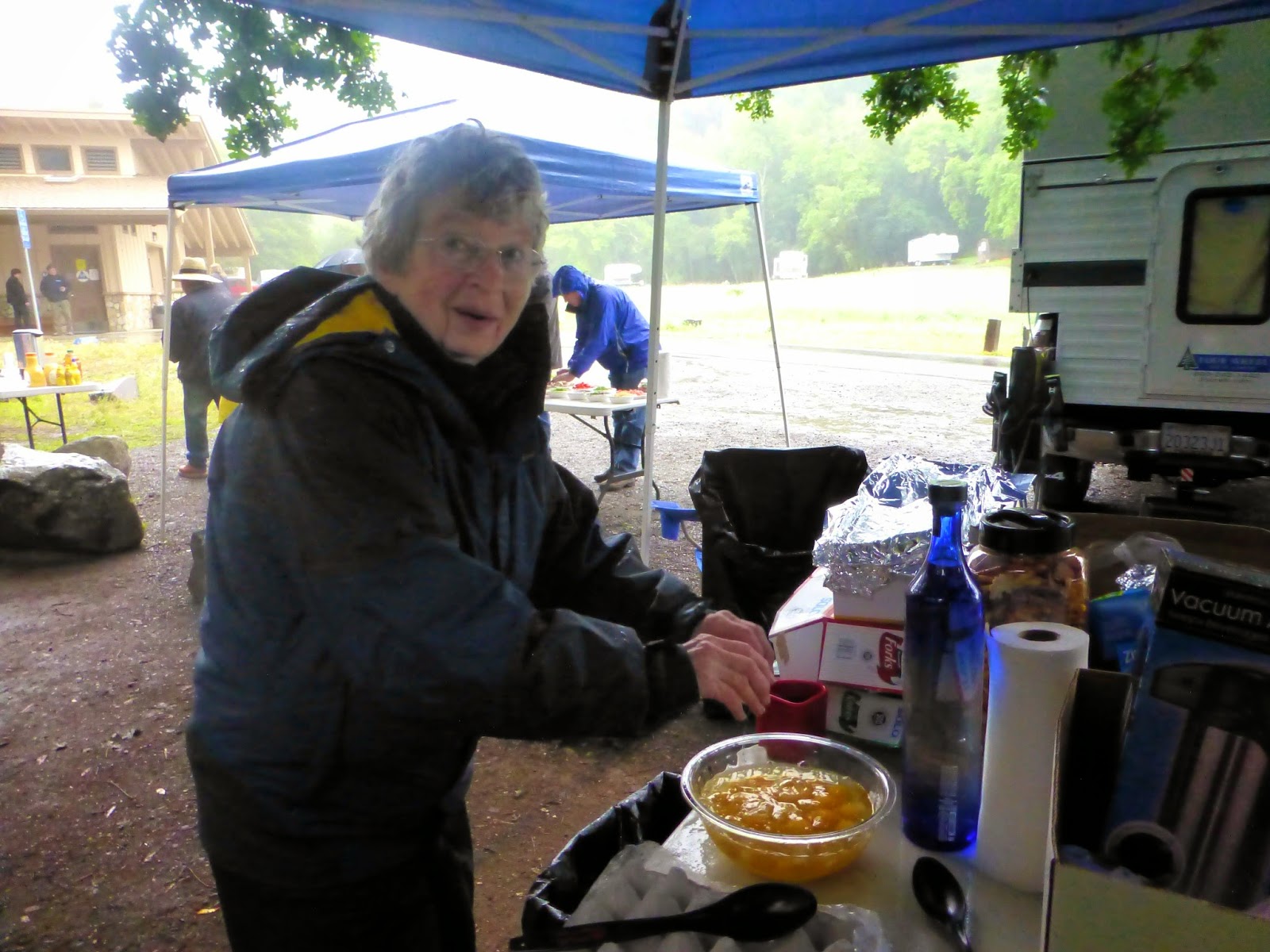 We left as we came in the rain. We had a great weekend and  less than a two hour drive home.  There is a Southern FWC Rally the end of October. Depending on what we have planned we may make the drive south. 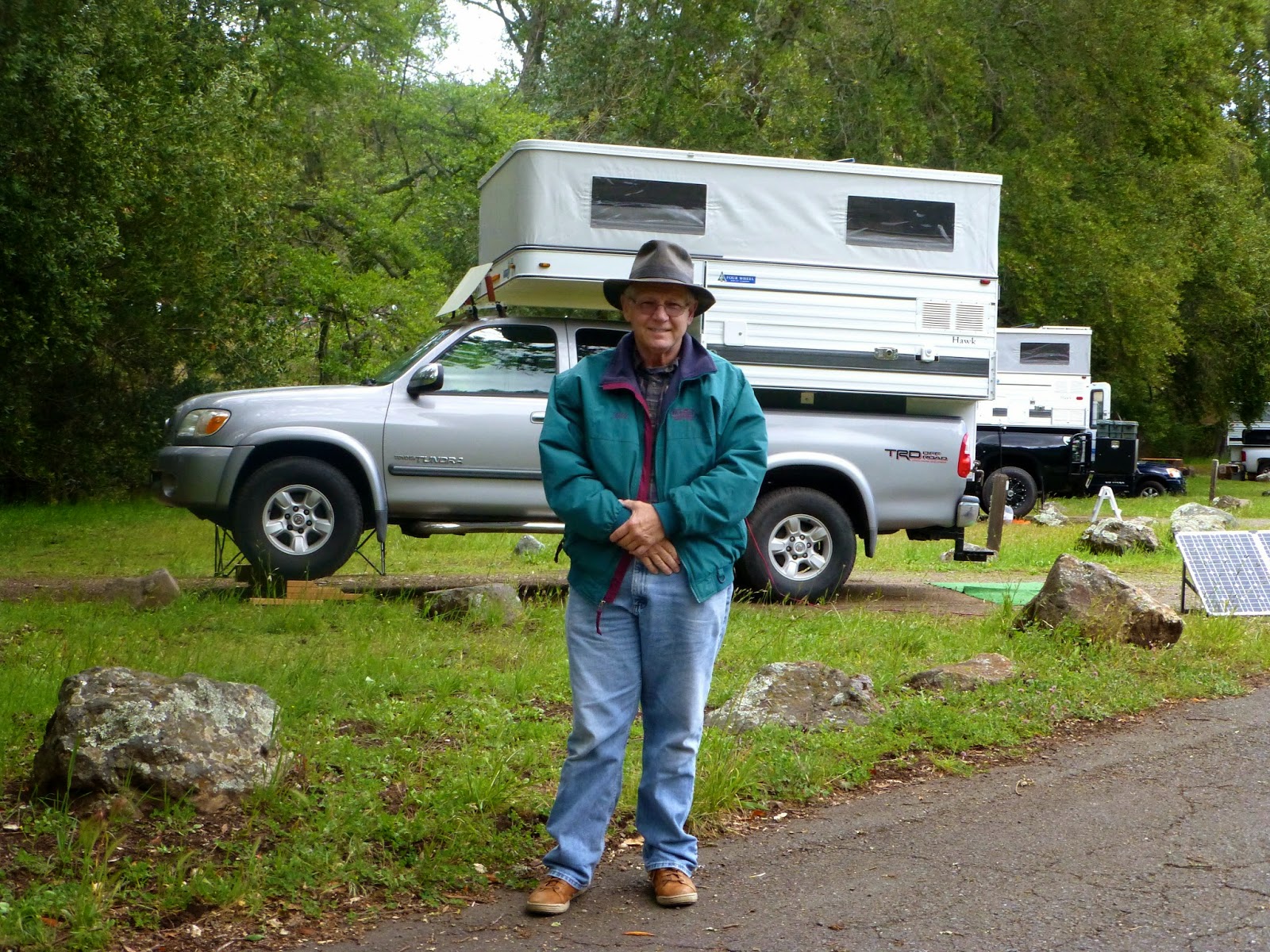 Video of the Rally.