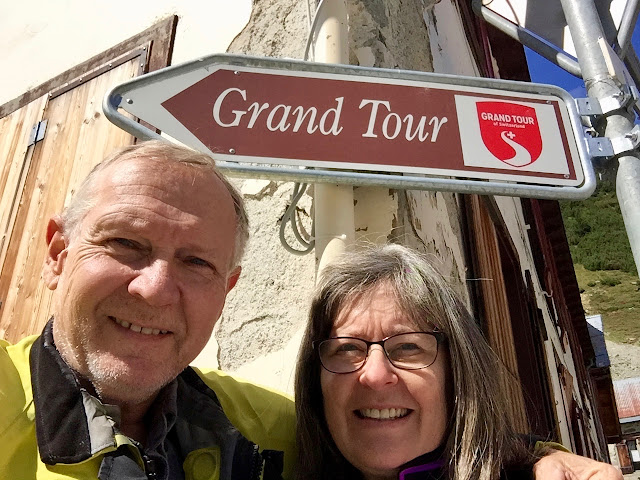 
[Note: Click on any picture for full screen of picture. Esc to return.] 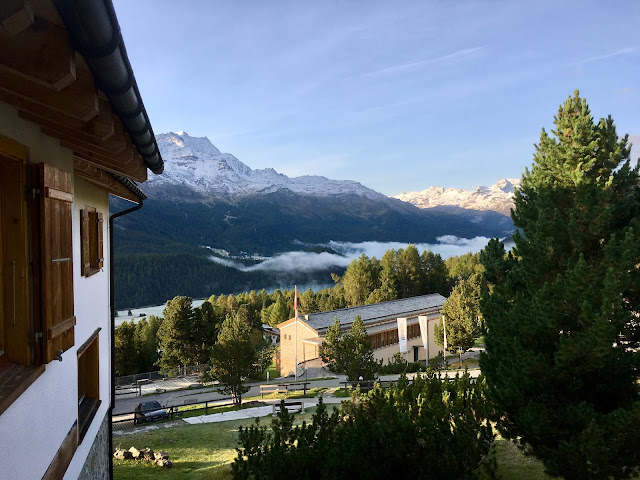 We got a really good nights sleep, tired from the long day yesterday. Woke up to blue skies, it was  crisp and cold with a light frost. This was going to be a resting day. We were going to ride around valley and check out the sights. We had a couple of recommendations from the hotel staff on what to see in the area. 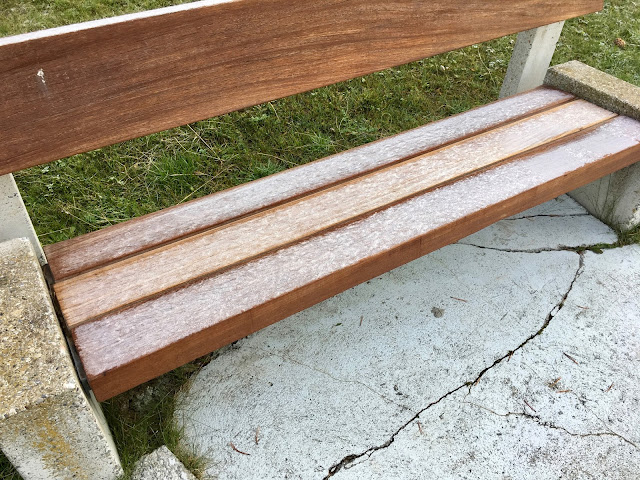 Walking down to breakfast we passed the resting bench covered with frost. The bench is for old folks who can't make the hike up up the hill without a rest. Glad we are not that old, yet ;-) 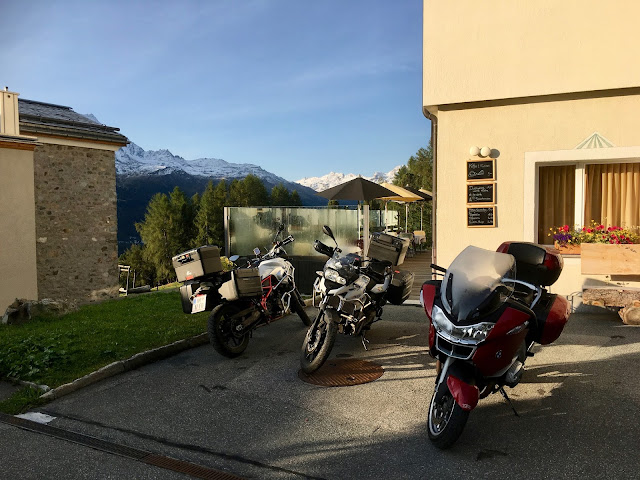 Nice breakfast at the Hotel, the European breakfast of sliced meats, cheeses and breads can grow on you. The yogurt in Switzerland is the best I have ever had. All whole milk and not greek.  This morning Scott Hendrickson came over and asked if we were riding the BMW out front. Scott and his son Eric were on a self guided Edelweiss tour of the Alps. They came from the Nashville Tennessee area. You do meet the nicest people riding a motorcycle.   We had passed the GS 700's they were riding on the way to breakfast.  The self guided tour they were on sounded like a fun way to see Europe. GPS set to take you on small roads that are so easy to miss. A book with local points of interest so you could pick what you wanted to see. Your hotels for each night were also reserved for you. I may want to look at this for next year. 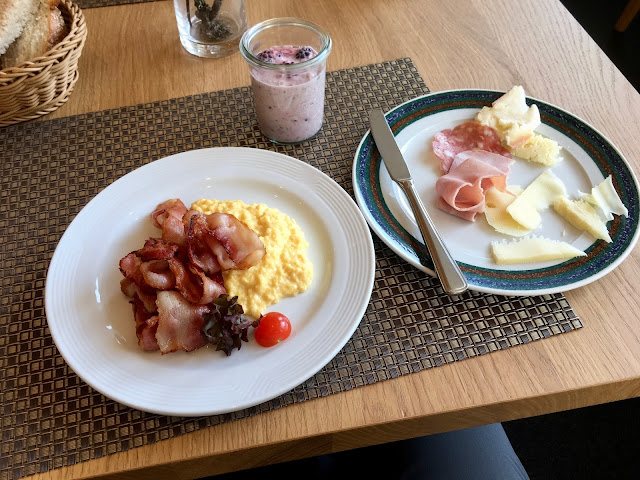 Our breakfast, yes they did have bacon "speck" in German and eggs if you asked. The small cup of yogurt was mixed with berries and muesli it is fantastic. 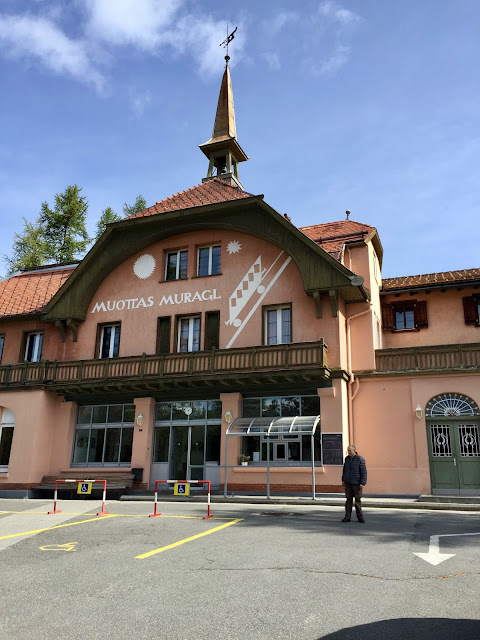 It was time to gear up and see the sights of the valley. First stop was going to be the funicular that will take us up to Muottas Muragl. We were told the view would be fantastic. With the bags on the bike empty we could stow the riding gear and not wear it as we looked at the sights. 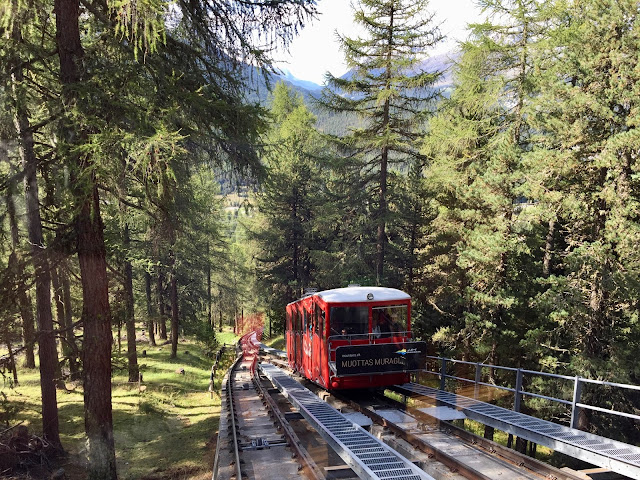 Our ride to the top. Switzerland has funiculars and cable cars all over the Alps. In the summer they take you up for hikes and great views. In the winter they are full of skiers. 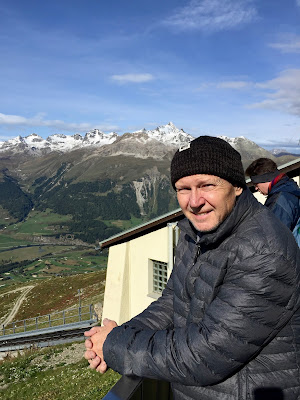 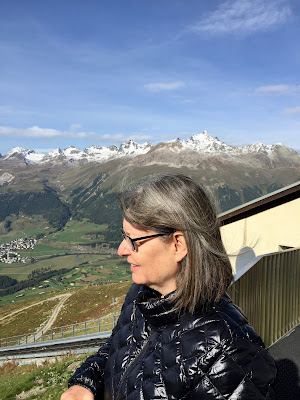 The views did not disappoint. Clear and cool with a light breeze. You could see forever.

This panographic photo gives you an idea of the view.  Julierpass comes in beyond the second lake in the picture.   Next we would be riding up the small valley to the left. 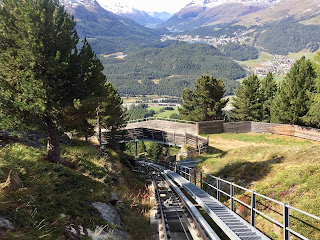 We were told there would be a cheese making demonstration at the top. We could not find it as we hiked around looking at the views. So we asked at the Hotel on the top.  The clerk said it was not today. She did say we should ride up the valley to Morteratsch and find Alp-Schukaserei to see cheese being made.  So it was time to  ride the funicular down the mountain and look for lunch.


Enjoy the ride down the mountain. 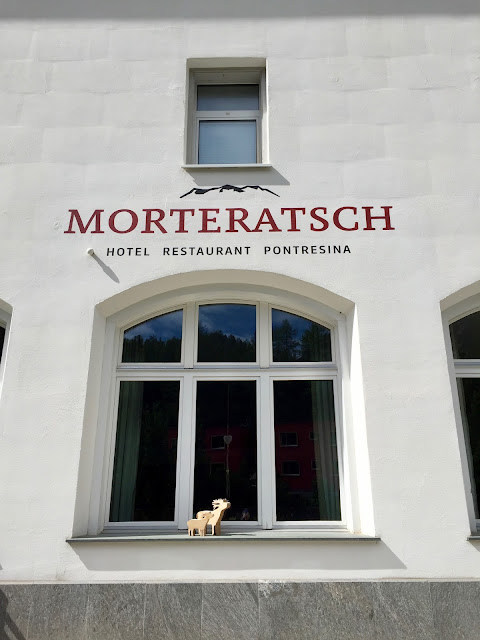 We rode up the valley to Morteratsch. Where we were told we could see local cheese being made.   We found the small road that ended at a rail stop  with  two hotels. We parked and walk across a small bridge to the older of the two hotels. They had a resturant with outside seating, the food looked good.  We crossed the rails and there was a trail that went to a glacier, too long of a walk for today. I told Veronica the hotel looked good for lunch but it was just a little to early eat,  so we went looking around. 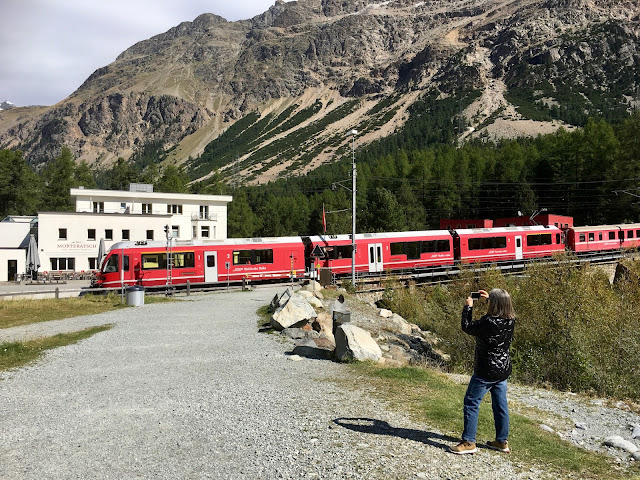 While we were on the other side of the tracks a train came by and made a stop, unloaded and continued on. You really can get almost anywhere in Switzerland by rail. 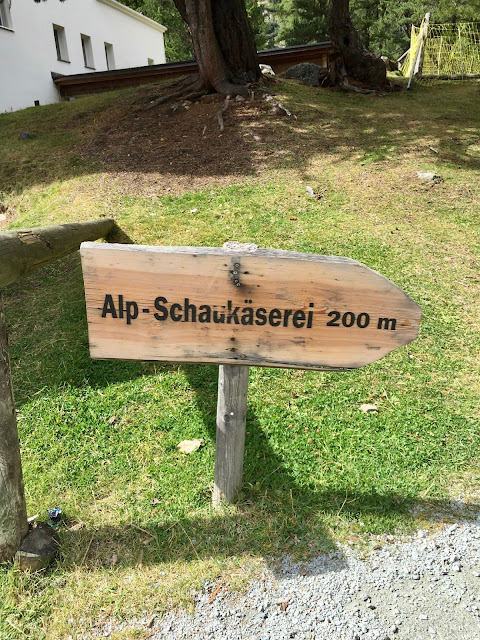 Walking around Veronica spotted the sign for Alp-Schaukaserei, just 200 meters down a gravel road. There was a large group speaking German having lunch outside. After seeing the food we knew this is where we were going to have lunch. 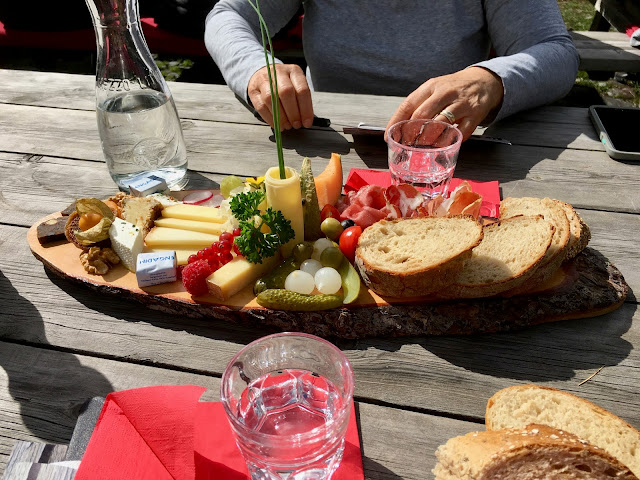 This is what we saw the large group eating. Only their boards were 3 feet long. We decided on the smaller serving. Breads, meats, fruit and cheese made on site. You can not get a spread like this in California.  I also had a bowl of barley soup. This may be one of the best soups I have ever had. 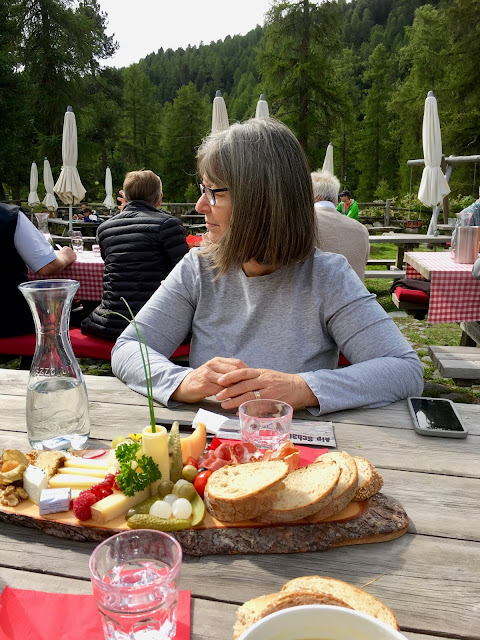 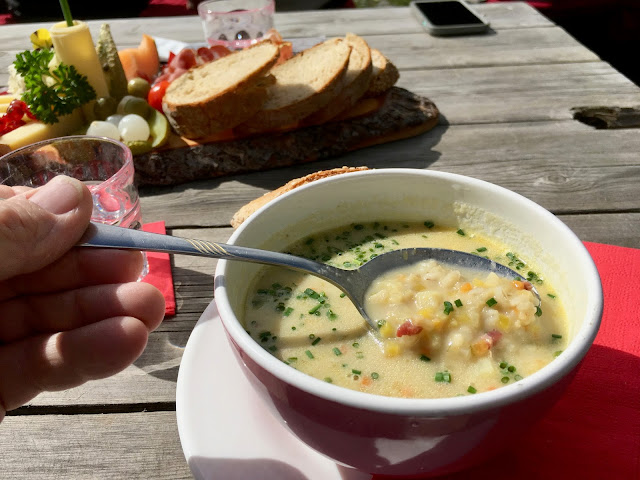 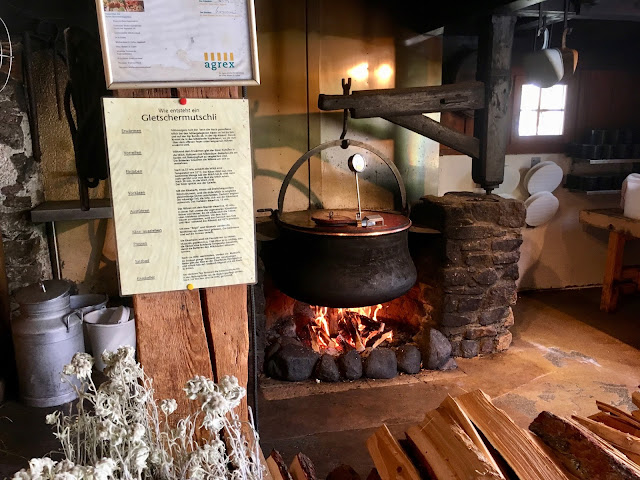 They were cooking milk to make cheese.  Old school style with a wood fire, must add something special as all the cheese was so good. 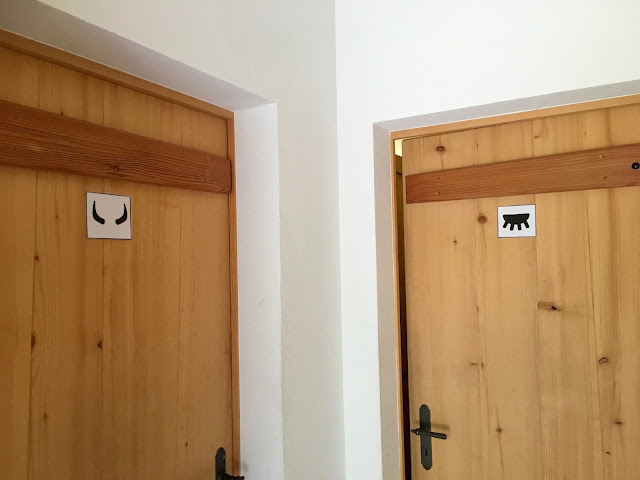 Just one last stop before we leave Alp-Schaukaserei. 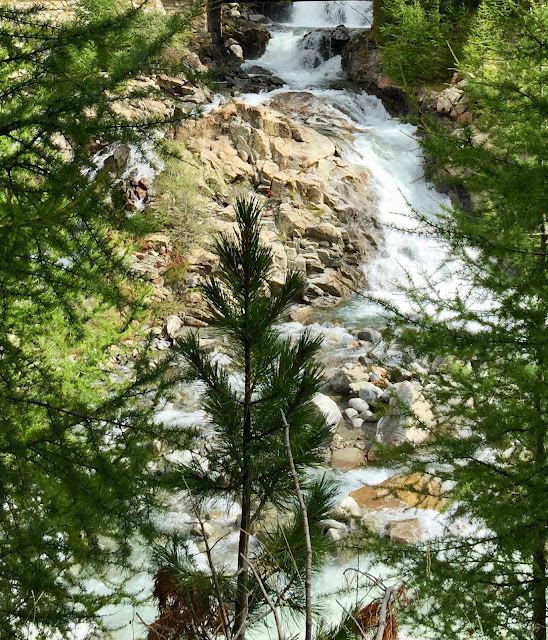 Walking back to the bike after lunch we passed a small waterfall. There is beauty to see everywhere you look. 4 days ago it looked like snow would keep us from getting to St Moritz on the bike. I am so happy the weather changed. 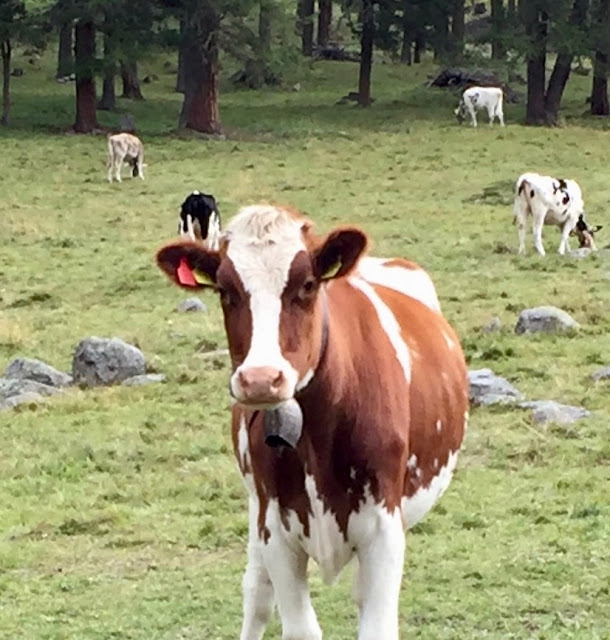 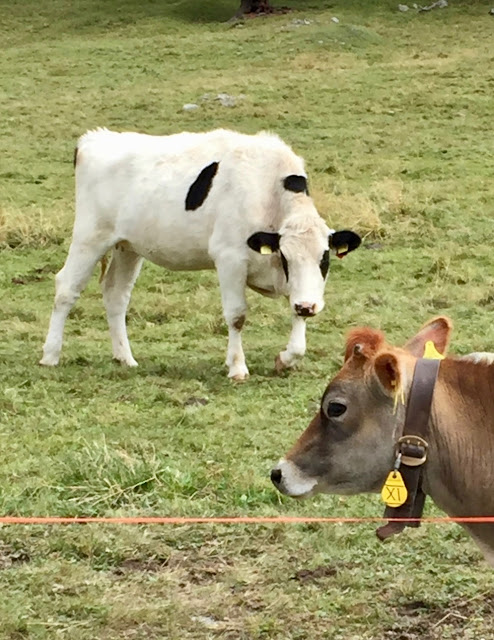 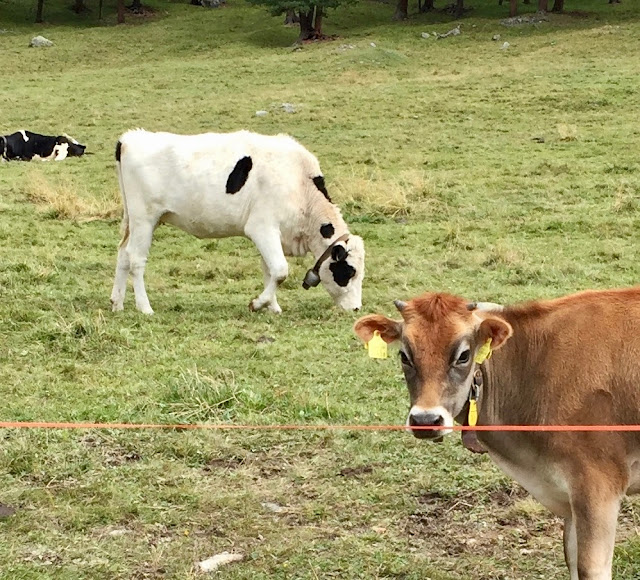 Riding back into St Moritz village Veronica told me to pull over she needed to take pictures of the cows.  Our grand daughters would love it here. In the pictures you can see the electrified orange wire, this is all that keeps the cows off the road. 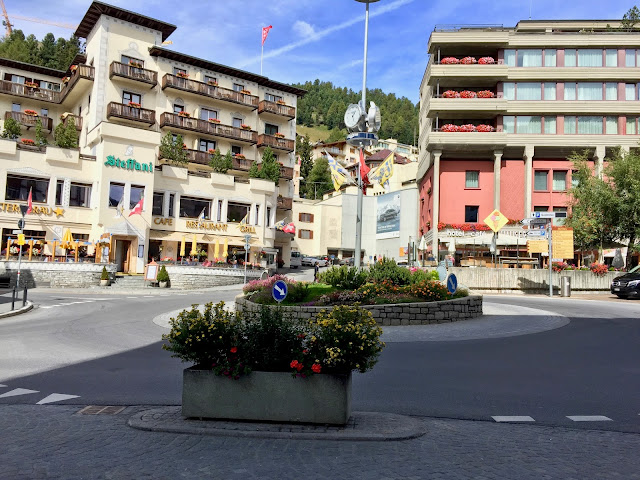 We rode into St Moritz village and parked the bike for a walk around. Think Carmel California on steroids. Looked but did not buy. Time to head back to our room this is our rest day. 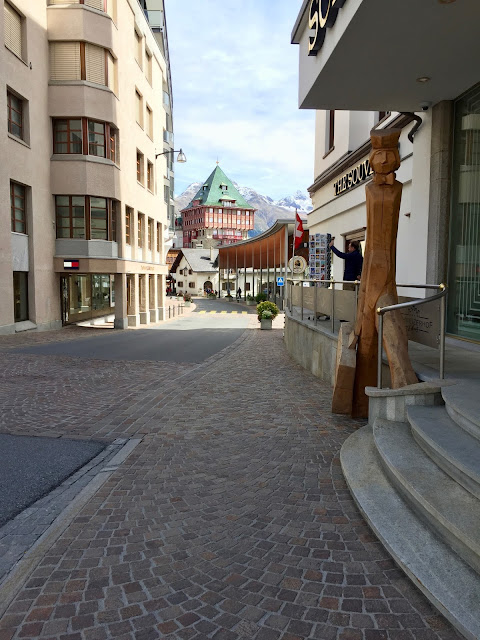 As with other towns in Switzerland there are always walking streets. No cars makes it easy to get around. 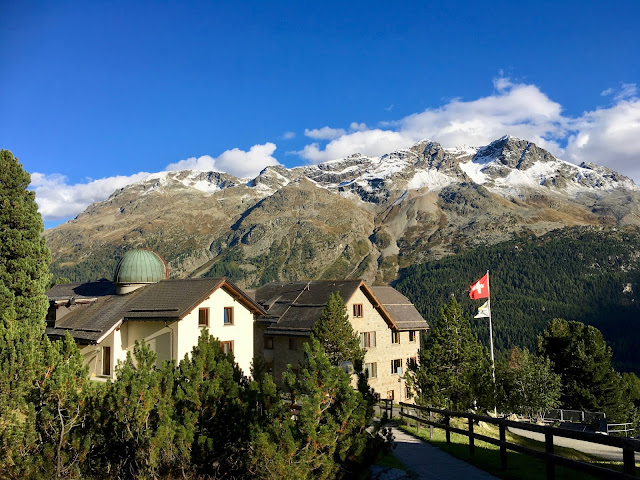 Our hotel used to be an observatory. You can still see a dome on one of the buildings. This was the view from outside our room. 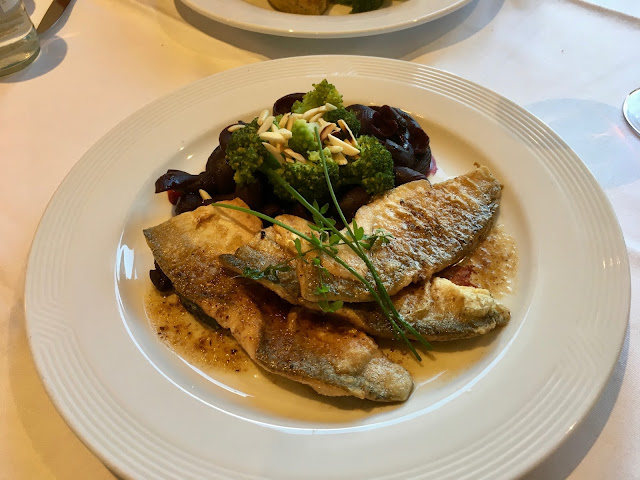 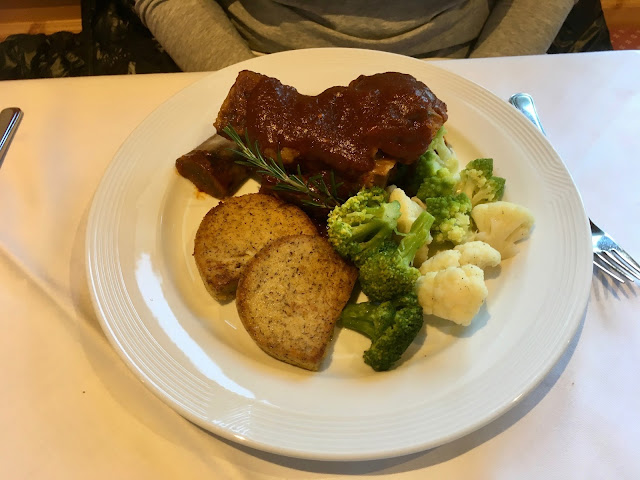 After a rest we freshen up and headed down the hill to dinner. I had the local fish and Veronica had the barbecued beef ribs.  She was surprised to  get beef short ribs with barbecue sauce. The polenta served with the ribs was very good. The chef did come out and talked with us, asking how we liked our meals.  Service at this hotel was top notch. 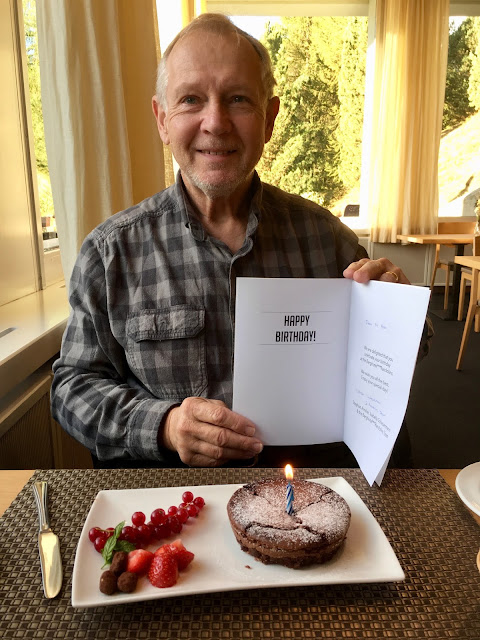 My birthday today, 67 is just a number. I will continue to not act my age. Hotel surprised me with a card and a small cake at breakfast. They really did a great job.  Berghotel Randolins St Moritz was a  great hotel  I would stay at again. 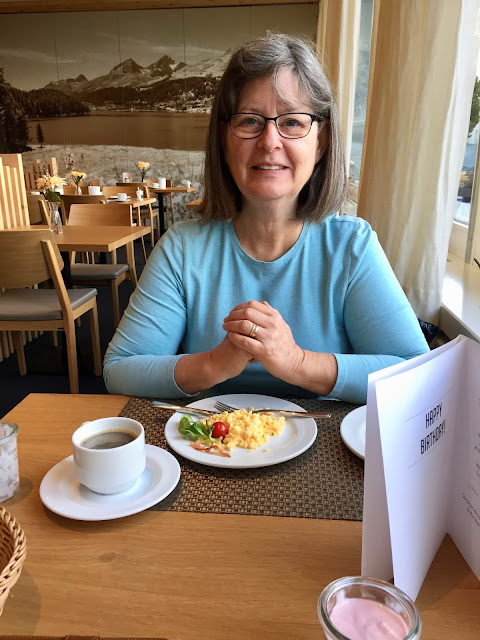 As birthdays go it does not get much better. Waking up in St Moritz  on a motorcycle ride through the Swiss Alps. Best part I was able to share it all with the woman I love.

That wraps up our time in St Moritz, and part 3 of my trip report.  Next we leave for Stein am Rhine and our last night on this ride.  It will be a long ride and the weather is changing.